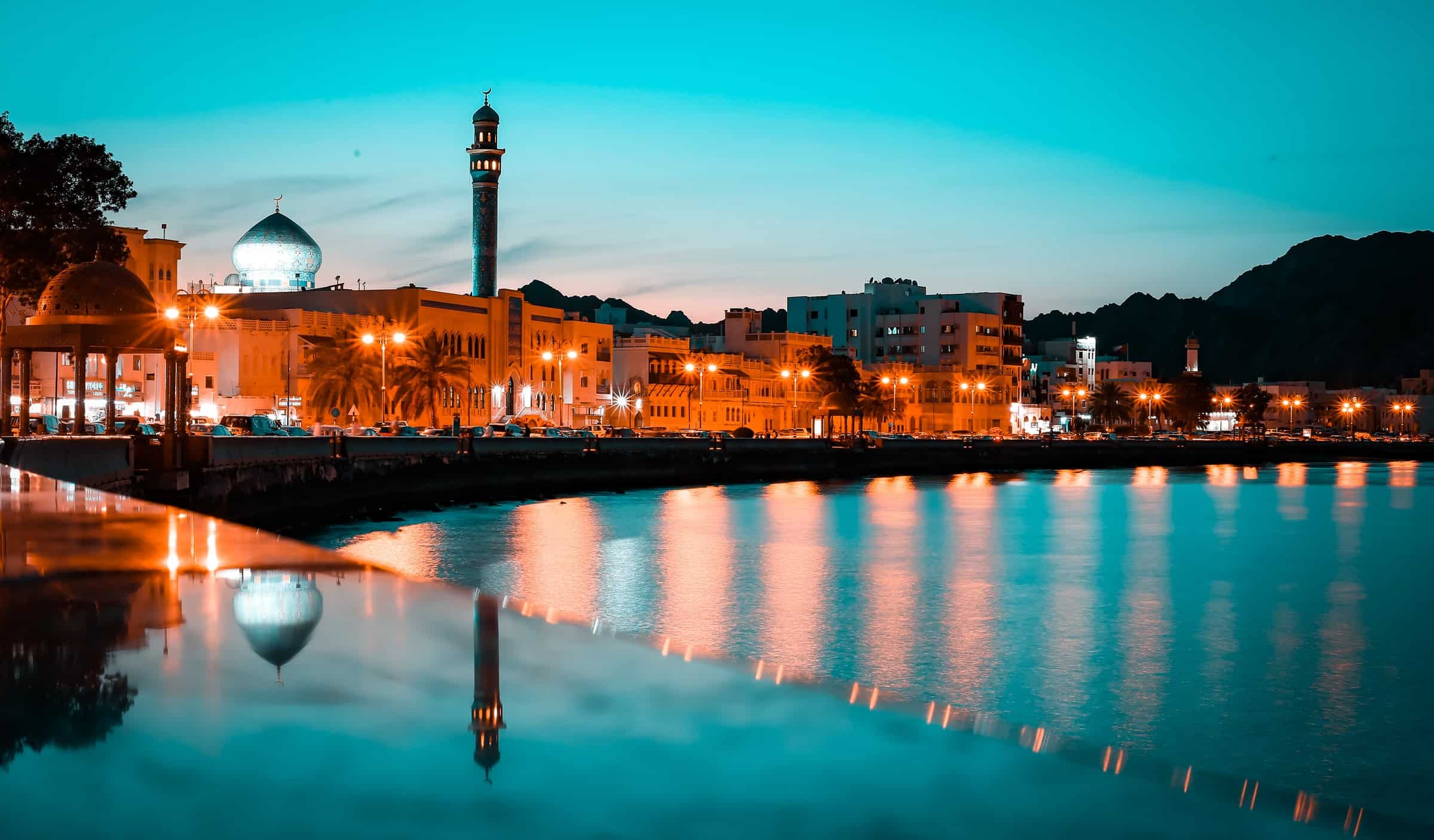 Muscat waterfront at sunset. Photo by Muhammad Shoaib on Unsplash

Any foreign corporation seeking to invest in Oman would be well advised to obtain professional advice and to thoroughly investigate local market conditions. It is good practice to engage a local agent (who can also act as your interpreter) and to also seek counsel from successful foreign businesses already operating in the region. Foreigners are generally made welcome but Omanis expect all visitors to abide by their conservative cultural mores, such as respect for privacy and traditional customs.

Oman is the oldest independent state in the Arab world and is officially known as the Sultanate of Oman. It lies on the south-eastern coast of the Arabian Peninsula where the Persian Gulf empties into the Arabian Sea.
The nation has a rich history and spectacular scenery and a friendly populace. A prized possession for European invaders, among them Portugal. The last occupiers were Persians, expelled in the 18th century and establishing Omani control. Bedouin tribes have roamed the area for centuries, much of the land is desert or dry mountains, only the coastal regions are lush and fertile.
As with many nations during the current pandemic, Oman has placed conditions on foreigners, and returning residents. Travellers must hold a valid visa and pre-register their proof of vaccination. The nation is subject to lockdowns and other COVID-related restrictions. Parks and beaches are closed. Now Oman is seeking to attract foreign tourists as much as foreign investment.

Oman is a monarchy; the sultan is both head of state and prime minister. The Sultan, HM Haitham bin Tarik Al-Said acceded to the position in January 2020, following the death of the former Sultan, HM Sultan Qaboos bin Said Al-Said. Sultan Qaboos’ death ended his almost 50-year reign in Oman. Oman’s succession laws place the Sultan’s oldest son, HM Theyazin bin Haitham, in the role of crown prince. The modern capital is Muscat on the northern coast.

Alongside promoting itself as a tourist destination, Oman is looking to the future to secure economic independence. In March 2021 the government announced new initiatives to stimulate foreign investment and local growth as part of the national Vision 2040 program to reform business culture in the Gulf nation. At 309,000 square kilometres, Oman is slightly smaller than Poland in area and has a permanent population of around 4.6 million. Around half of residents are foreign workers. There is a lively expat culture but new arrivals are advised to come up to speed quickly with local work culture and customs. 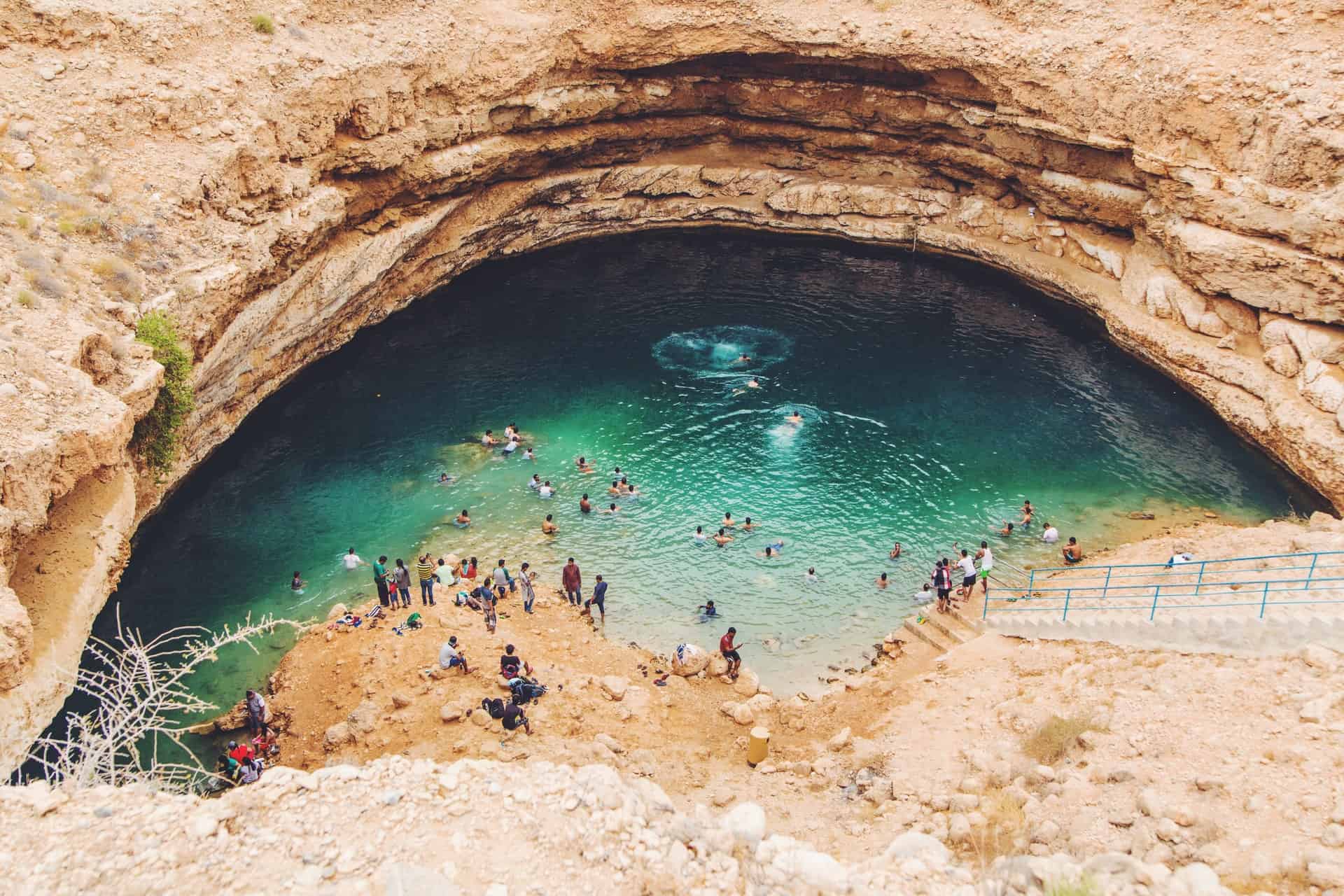 Locals and tourists enjoying a dip at one of Oman’s famous sinkholes. Photo by Katerina Kerdi on Unsplash

It is relatively easy to do business in Oman and the nation ranks well in the World Bank’s Doing Business global survey for 2020. Oman’s relative political stability is attractive to foreign investors, as is the government’s welcoming attitude to businesses wishing to establish a presence in the region. The Omani leadership is seeking to diversify the national economy to reduce its reliance on petroleum and natural gas. To support this economic vision, several free zones have been established across the Sultanate to facilitate international trade and foreign investment.
The focus in these free zones is on building export-oriented industries that can supplant or supplement oil and gas revenues. This has led to opportunities opening up for the development of new transport and manufacturing infrastructure, service projects, education, health, tourism and information technology. The free trade zones in the regions of Duqm, Salalah, and Sohar provide tax-free and duty-free arrangements for foreign investors.
A dedicated government agency the Public Authority for Investment Promotion and Export Development is the main department that foreign investors will deal with in establishing a presence in Oman.

There are several advantages for foreign business entities in Oman, including its strategic location on sea routes that join markets in Europe and Asia. Road and air links to the Gulf states is also excellent, allowing for market diversification. The Oman Central Bank has a solid reputation and holds significant reserves. Omani tax laws for both individuals and corporations are generous, and the workforce is highly-skilled and mostly proficient in English.
Foreign direct investment (FDI) is welcomed in Oman and the Foreign Investment Law provides incentives for investors in fisheries, heavy industry, mineral extraction, and agriculture. The Oman Development Bank is also a reliable financial partner. Custom duties are waived on the import of some categories of capital equipment and raw materials, and corporate taxes are not levied in the first five years of an FDI-funded enterprise.

Disadvantages are minor, but the key requirement is that FDI enterprises must have an Omani partner with a minimum 30 percent share. There are exemptions to this rule in the electricity and water sectors because of their strategic importance. Foreign entities are also limited to trading shares via the Muscat Stock Exchange through an authorised local broker.
A foreign investment licence must be obtained from the Foreign Capital Investment Committee within the Ministry of Commerce and Industry. The committee will assess an application and then refer its recommendations to the relevant Minister for a decision. Priority is given to projects that have a significant local component and that meet Oman’s development objectives. Omani authorities will also conduct regular compliance checks on FDI projects against environment, health, and employment regulations and other standards. Online assistance and information regarding potential investment opportunities is available from the Inward Investment and Export Development Agency, ITHRAA.
The Omani banking system is modern and liberal, though there is also an emerging system of Islamic finance. All licensed local and foreign commercial banks are supervised by the Central Bank of Oman. 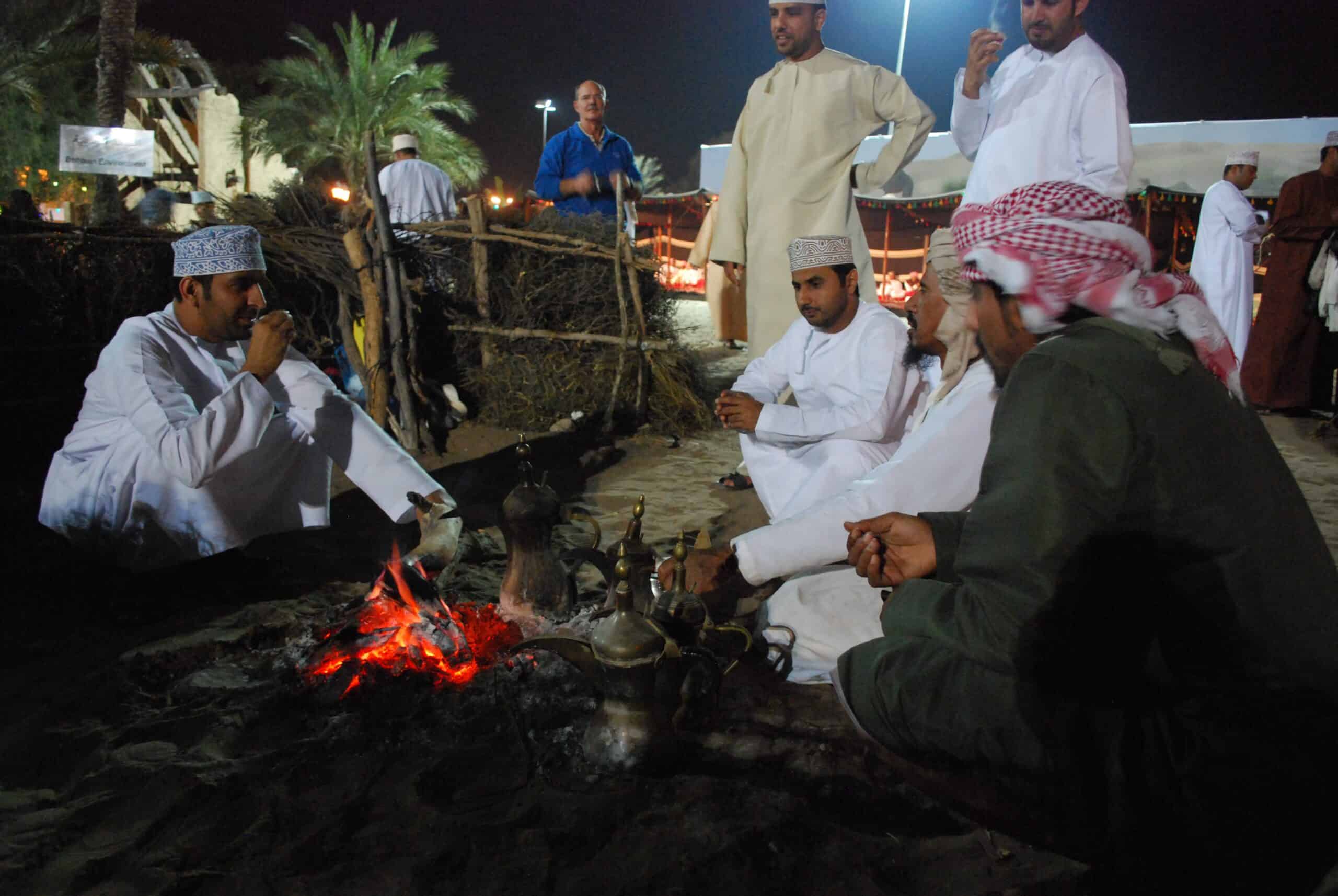 Business Culture in Oman
Any foreign corporation seeking to invest in Oman would be well advised to obtain professional advice and to thoroughly investigate local market conditions. It is good practice to engage a local agent (who can also act as your interpreter) and to also seek counsel from successful foreign businesses already operating in the region. Foreigners are generally made welcome but Omanis expect all visitors to abide by their conservative cultural mores, such as respect for privacy and traditional customs.

Omani business culture is bilingual in Arabic and English, therefore engaging a trustworthy interpreter is a sound investment. Like many of their neighbours, Omanis believe that small talk is a vital ingredient in building trust and confidence in business relationships. While Western business-people might consider this a waste of time, polite and friendly conversations around health and wellbeing is crucial to winning friends and influencing people in Omani business circles.

There is also a circularity to business meetings. Visitors are often ‘double-booked’ and it is not unusual for Omani executives to entertain several guests together, engaging in discussions with one group while the others are served light refreshments. Western sensibility might find this frustrating, but it is important to remain calm and to respect the Omani way.

The standard business protocol is that the visitor must offer a proposal to the host for consideration. But presentations must be short and succinct. Rarely will the host provide a firm decision on the proposal at first hearing and a “Yes,” means no more than “I have heard what you said.” Omanis do not like rigid expressions of opinion and flexibility is a key to developing solid business relationships. Any contractual agreement is likely to take time and several rounds of meetings to finalise.

Oman is an Islamic nation and therefore all religious observances must be respected. Omanis tend to follow a subbranch of Islam, Ibadism and most are pious in their daily lives. This means foreign visitors must ensure they are familiar with local traditions around Holy holidays and rituals such as not eating or drinking during daylight hours for the holy month of Ramadan. Similarly, dress codes for both men and women are modest, though head coverings are optional. It is good practice for men to wear long-sleeve shirts with a tie, and a jacket or suit for more formal occasions; women should carry a scarf and follow the cues provided in different settings as to whether-or-not they should cover their hair. Typical Western casual attire, such as ripped jeans, T-shirts and shorts is frowned upon, as are any public displays of affection between the genders.

Finally, despite the soaring daytime temperatures, visitors to Oman are advised to “keep their cool” and not express any controversial or angry opinions. It is also worth noting that seemingly innocuous hand gestures may be considered offensive and punishable under Omani law.
If you are invited into an Omani home gives and polite chatter are the norm. Leave your shoes at the door and do not refuse hospitality. You can also expect to be questioned about your family and your reasons for visiting Oman, so be prepared!